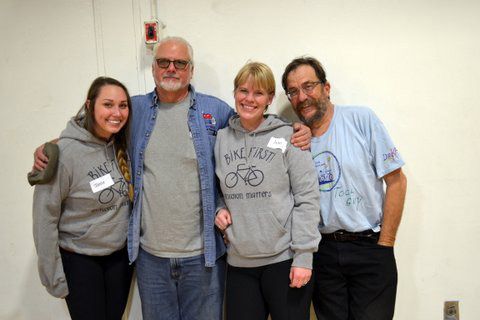 From middle-schoolers to retireees, volunteers from all over the region spend a magical week helping individuals achieve an important childhood rite of passage—independent bicycling. Without this hard working, quick walking and often fast running corps of enthusiastic community members, this program could not be.

In preparation for Bike Week, several of us work all year.

“I just wanted to say I had the best time at camp. Going into it I was really only doing it because Liz wanted me to, but I got so much more out of it than I would have ever expected! I’ve never worked with kids with disabilities before, and I thought I wouldn’t be able to be good at it because I’m impatient, but I ended up genuinely having so much fun. This camp has opened up my heart so much and I’m so grateful to have experienced this week. Thank you so much!!!” -- Emma, Volunteer Spotter

"The heart of a volunteer is never measured in size, but by the depth of the commitment to make a difference in the lives of others." - DeAnn Hollis 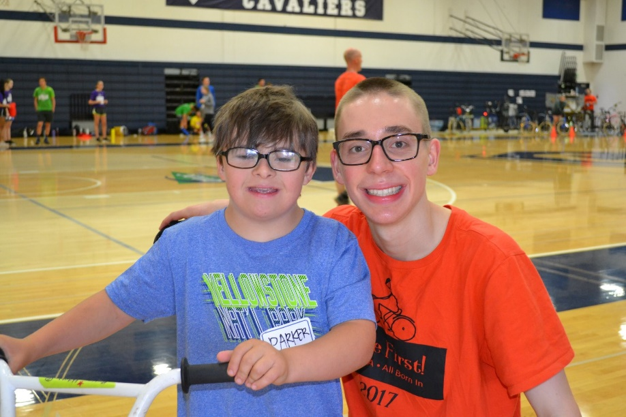 "Five years ago, during the latter days of June 2015, my father dropped off fourteen-year-old me outside the doors of Concordia University’s gym.  The night prior, a Sunday, I had attended an orientation meeting for all volunteers participating in the Bike First! summer camp.  The camp itself is unlike any other throughout the country.  Bike First! targets a specific demographic:  those who are differently-abled; these disabilities can be cognitive, physical, or behavioral.  During the camp, youth and adults embark on a life-altering journey as they learn how to ride a bike.  Volunteers provide the skills necessary to ride a two-wheeler while developing inexpressible relationships with their assigned riders.  I’d like you, the reader, to pause for just one moment and imagine what fifteen-year-old Noah was thinking:  a young, inexperienced teen who, prior to this camp, possessed no tangible experience working with people with disabilities.  As I walked through those gym doors on that Monday in late-June, my life was unequivocally changed.  I can assert that my volunteering at Bike First! is one of the most salient reasons behind my continued development as a human being.

Before I began volunteering for Bike First!, I’m not ashamed to admit that I certainly failed to realize the necessity and subsequent implementation of inclusion.  Bike-riding is a mundane concept; myriad people take this life-changing experience for granted.  You and I learned to bike for a plethora of reasons:  becoming independent, the ability to hang out with friends and family, to have a mode of transportation.  Each biker, before attending camp, is required to complete a questionnaire.  Towards the end of the application, there is a question that has led me to routinely ruminate deeply on the meaning of this work:  “Why does your child want to ride?”  Many of the answers to this question have brought me close to tears; all of them are centered upon one thing:  the concept of normalcy.  For some, it’s wanting to be like their brother or sister.  For others, they long to play with friends without having to have their parents commute with them.  And for even more, they just want to be like everyone else.  Throughout the entirety of their lives, many of these children have been embattled with constant differences and societal exclusion.  To get on the bike is an indescribably large first step, an opportunity that I’m immensely appreciative to help them achieve.  At the end of camp, to see them ride with smiles while their parents are reduced to tears or joyfully yelling at the top of their lungs – this is why I volunteer.

I have dedicated approximately 235 hours to this camp.  When I began volunteering at Bike First!, I was an untested, eager teen; I wanted to make an impact within this program.  I had participated in a variety of programs and volunteering commitments before this initiative began, but I’d never experienced something like this program which has continually forced me to grow.  Mid-way through my first year, I had several lead volunteers talk privately with me; they informed me that I possessed a unique ability to connect with the campers.  After that conversation, I promised myself that I’d learn everything there was on how to best connect with these youth, and by extension, foster inclusion within my own community.  Each year I gradually improved my skills; my experiences throughout the years, both beneficial and negative, deepened my perspective and allowed me to better serve the riders I taught.  In year four, I became a QuickStart leader; QuickStart children begin mid-way through the camp, as they’ve already developed some of the skills necessary to ride.  This experience gave me a taste and a newfound passion for working alongside individuals with disabilities.  This past June, the leader cohort nominated me to become a full-time leader for this year’s camp.  I was in charge of working with five riders and over 10 volunteers.  I was the sole communicator to the parents on their child’s progress, taught them how to handle lessons following the conclusion of camp, and was the first point of contact for my riders.  I’m proud to state that all five of my participants made it on to two wheels, yet I attribute all of the credit to the sheer dedication and drive they exhibited.  For several of the riders, it was a struggle.  Tantrums were had, crying occurred, and there were slip-ups along the way.  Nevertheless, we persisted.  One child I worked with refused to touch the bike and had massive outbursts all throughout the camp; on the final day, my team and I were able to coax him onto the bike, upon which he began smiling and rode around with his sister.  I collapsed into his mother’s arms, overwhelmed with emotion.  This is why I volunteer.

My life, and future goals, are radically different than they were five years ago.  I met one of my friends through this program, Cody Sullivan; he recently was the first person with Down Syndrome in the state of Oregon’s history to graduate a four-year university.  I promised myself two years ago that once I complete college and enter the workforce, I will adopt a young child with Down Syndrome.  These are just a few of myriad examples of the changes that have occurred throughout my life.  I will continue to devote my time to this camp every summer into the foreseeable future, as these children are living proof of the power of commitment and volunteering.  I’ve known several of the participants for all five years of my tenure, and it’s been an absolute blessing to grow alongside them." -- Noah, Bike First! 2019 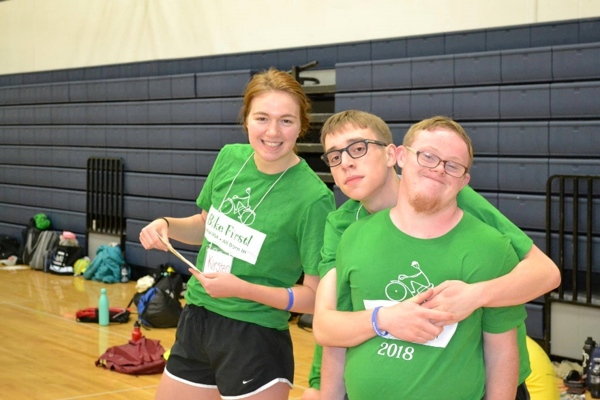