A tale of a recent trek my family took on our farm... 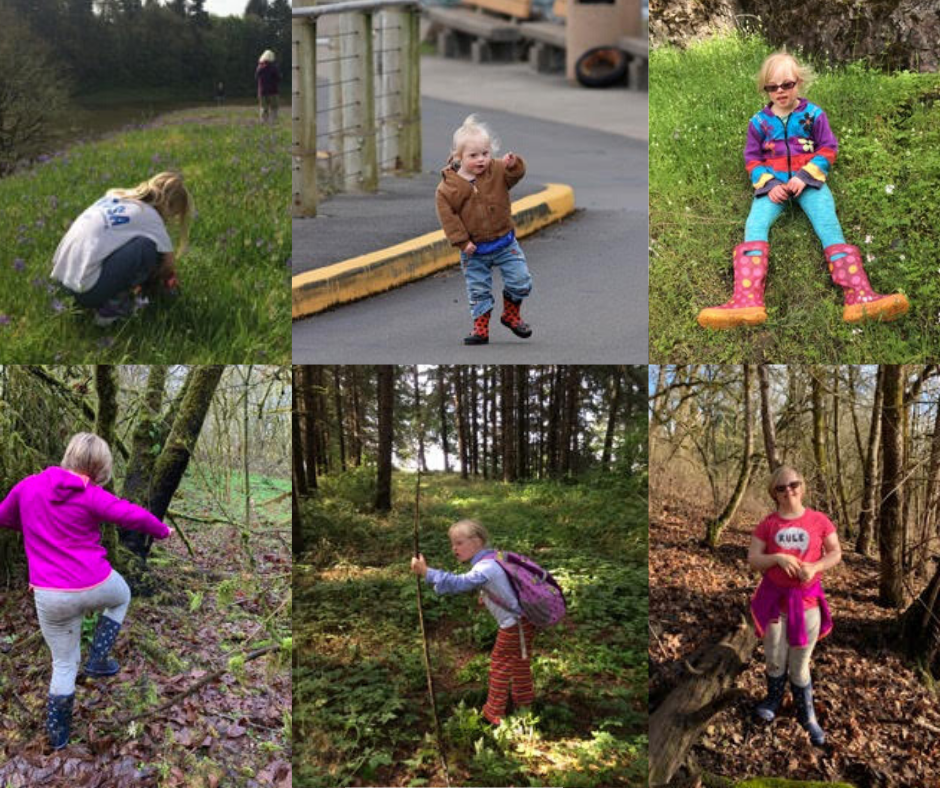 Almost as if it was yesterday, I remember standing on the top of a fire tower on the flanks of Mount Hood, six months pregnant, sending morning sickness over the deck railing to fall onto my cross-country skis in the snow below, and thinking, “I am not going to be one of those moms who gives up the things I love just because I have kids.” The next winter found us skiing in to a cabin on the shores of Trillium Lake, Adara lulled to sleep in a sled behind David, while I carried a pack with gear and food to get us through a few days. Sure, we had stepped the adventure down a notch from the fire tower the winter before, but look at us! Here we were in the snow with our baby and our dog and nothing was going to stop the adventure.

Fast forward a couple years, another baby, and find us at the end of adventure as we knew it. Partly just because of the chaos of life; I know we are not alone in this particular sacrifice. But also, as Adara grew into a more opinionated toddler and preschooler, we realized we had a kid who did not, in fact, love to hike. Sure, we enjoyed our morning pajama walks around the farmyard, an hour to walk half a mile exploring puddles and pinecones, picking apples from the old orchard, and ending up on the banks of the Lewis River, tossing rocks in the water and dancing to the rhythm of passing freight trains. But even those pleasant journeys had their fair share of sit-down strikes and absolute refusal to walk another foot. And then, the summer she turned five and was just learning to pump on a swing and peddle a bike, Adara had a hip surgery that immobilized her in a Spica cast for ten long weeks, and she had to learn to walk again at the end of the summer. She bounced back remarkably well, as kids do, but she was left with one leg an inch or so shorter than the other, and an extreme lack of confidence in her ability to put the miles in.

And so we have adapted. We still walk places, of course, and we have gotten both kids out on cross-country skis a couple times, much to this mother’s delight. But the dreams I had of long family hikes and backpacking trips, and weeks spent on the mountain on skis have given way to stolen moments standing in the sun in the woods, waiting for my kid to end her protest and stand up and walk. I am learning, slowly, how to get out  in the world with Corwin, Adara’s 10-year-old brother, who does love a good hike. This week we are exploring New York City together, a different kind of adventure, but one no less dear to me, as I am back in the city of my college days. Yesterday as we were crossing Park Avenue (over the subway as it headed underground, through a gauntlet of beeping horns, sirens, and general Manhattan mayhem) he said thoughtfully, “I don’t think Adara would like it here. At least, not until she got used to the noise.”

And he’s right, so we continue to adapt and find our way to adventure that she can love. She’s an ocean girl, loves a good roller coaster, can throw rocks in the river for hours, and is always happy for a picnic in the sun. She slows me down, and when I remember not to be frustrated with that, we can have an incredible time out and about. And when I can, I sneak away for a day to ski, or hike, or sit in the woods, but my declaration from the top of that fire tower fourteen years ago seems like pure hubris when I look back.

But every once in a while, the kid can still surprise with just what she decides to do. Last weekend my husband David led us on a trek into the woods on the farm. He had a destination in mind, but when we were a quarter mile away, we turned a corner in the logging road and found a tree that had still been vertical the day before, laid out across the road. And so we had to get out and walk. Corwin rolled out of the truck, followed the dogs under the branches and headed up the road on his own; Adara slammed the truck door, re-buckled her seatbelt, crossed her arms with a huff, and declared she wasn’t going anywhere. I tried to change her mind, and when it was clear that wasn’t happening, I clambered over the tree in the trail and stood taking in the morning in the woods. After a few minutes, David put his powers of persuasion to work and the next time I looked back, Adara was climbing down out of the truck and heading toward the tree. We helped her over it, and proceeded to spend the next two hours tramping through the woods together.

After we all had our fill of David’s vantage point, Corwin wanted to show me and Adara a spot down on the water he and his dad had explored a few weeks earlier. This would involve a bushwhack through blackberries and fallen trees and mud and rocks, and as we set out I had very little expectation that Adara would make it more than a few feet into the woods before declaring it was time to go back to the truck. I figured at very best, in order to keep her moving I would have to persuade, cajole, distract with stories and song, or just plain mean-mom our way through, as I have so many times before. But she wanted to give it a try, so I kept my mouth shut and followed the three of them down the trail and into the woods. Corwin and David got ahead of us pretty quickly, but Adara just kept on trekking. Before long it became  clear that the marginal path that David had planned on leading us down had been covered in wind-fall trees, and he and Corwin back-tracked. Most days, just that much change in plan would be enough to send Adara packing, but she just rolled with it, and we adjusted our trajectory to follow their new path. Within seconds David and Corwin were just orange and blue splashes of color in the ravine below us, and Adara kept putting one foot in front of the other down the hill. As Corwin kept himself busy scaling the steep sides of the ravine and playing in oak trees, Adara asked me to help her find a stick to use to push branches out of her way, and kept on walking. She tripped over a root and fell flat on her face. And got up laughing. And she laughed so hard she lost her balance and immediately landed on her backside in the same spot. And she got up laughing. Normally one tumble is enough to invite her to sit in the trail for five to ten minutes, shaking her fist at the world, and especially at her mean mom for bringing her out here in the first place. But this time, she just laughed and kept on going. She followed the chihuahua under trees and over streams, she got tangled in vines, and she just kept going.

This hike was simultaneously one of the hardest and one of the most successful walks our family has ever taken together. As I watched Adara navigate her way through this incredibly difficult terrain, I re-learned a few lessons she has tried to teach me before, and they seem all the more important as we launch into the wild terrain of adolescence.

If I can just learn to keep my mouth shut and my expectations to myself, and let her set her own pace and ask for help when she wants it, this kid has her life under control. Every year, I get a clearer understanding of just what it means to make space for my kid to determine her path through this world, and to leave room for her to fall flat on her face and get up laughing. And yes, sometimes it has meant that I have to put my own ideas of where life should take me on the shelf, and some days that’s hard, and some days it’s enough to just be out in the woods in a splash of sunshine.