Working Side by Side 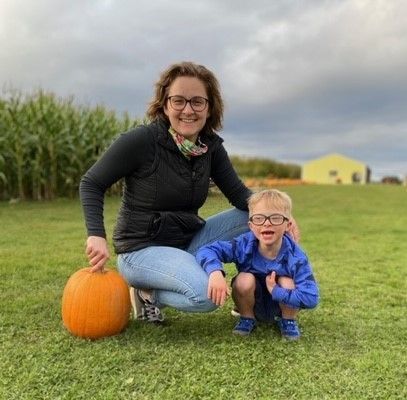 Hunter is our oldest, so when his little sister came around it was shocking to me that I didn’t have to fight for her in the same way I do for Hunter, who has Down syndrome.  Even as a small baby, his first daycare told us that he would be kept in the “baby room” rather than moving up alongside his peers of the same age, when he turned one.  Because of these experiences, inclusion has been on the forefront of our minds, and at times have been quite consuming, since the day he was born.  We’ve been very fortunate over the last few years to have support from people in our community and organizations such as Northwest Down Syndrome Association to help us prepare for kindergarten and what is to come in the public-school system.
What is interesting about this year, however, is that all the work we’ve put in to ensure Hunter is fully included and receiving appropriate supports has been delayed by COVID-19.  We’ve had to change the trajectory of the last five years and get creative on the fly with what will and will not work for him.  In May, we had his first IEP meeting, where it was determined he would be in the general education kindergarten class, with push-in services throughout the day, and several accommodations.  All of this to ensure he is supported and can thrive in this environment.  This is something I had spent a lot of time advocating for by attending the All Born (In) conference, being part of the NWDSA Kindergarten Cohort, and networking with other parents and educators who would provide invaluable advice and experiences to learn from. But at the end of summer, when they announced we’d be starting the year distance learning, we grew increasingly skeptical as to how the plan we had worked so hard to achieve for Hunter (not to mention, how hard Hunter had worked to be successful in the classroom) would pan out and what changes would need to be made.

After about three weeks of distance learning, Hunter’s team came back together to adjust his IEP.  As suspected, our push-ins became pull-outs, and most of his accommodations were “paused” because they could not be executed in the distance learning environment.  Even though they had assured me we would come back to the table and make all necessary changes back to the original plan once he returns to the classroom, it still felt a bit like a set-back.  Here we are, fully included in the general education classroom, and I’m still seeing Hunter learn in what feels like the most restrictive environment.  Then, to have some of these hard-fought supports and placements changed was discouraging, to say the least.

What wasn’t discouraging, however, was to sit in this virtual room with educators and professionals, some of which have never even met Hunter in person, and to hear each of them speak highly of him and have as high of expectations as we do for him.  I realized, after five years of preparing for this “fight” for inclusion, that the people on his team all have a common goal: to do what is right by Hunter.  I had been busy worrying about whether his speech-therapy would be “push-in” or “pull-out” model, I had to regroup and remind myself that the goal is for Hunter to receive speech in the best and most effective way for him.  And if that means changing this to pull-out, so be it.  During this amendment meeting,  I was able to listen to his teacher, who has met Hunter in person once, speak to the group about what she has noticed works well for her to engage with Hunter, as well as reminding the group that Hunter’s favorite animal is the Elephant and that he loves the color blue.  I heard the principal speak to how hard her team is working to do what is right by all of the students in their classes, but also about how she sees parents working harder than ever before to help their kids through this time of struggle and uncertainty.

The NWDSA Kindergarten Cohort really drilled in that we, as parents, are an equal member of the IEP team.  Leading up to this experience, I hadn’t truly understood what that meant.  I always thought that I would be an equal member, but have a different desired outcome than everyone else.  I also assumed that I would be the most important member of the team, because I was the only one who would be an expert on my own child.  Boy, was I wrong.  Working along-side his educators, being able to ask questions and truly listen to the answers given, and provide my own feedback when necessary – this is what makes us a team, all equal members.  I am no more important than any other person sitting around the “table”, because all come with our own strengths and knowledge.  And, in fact, Hunter is the most important member of his own IEP team – and I’m blessed to see that every single person on the team recognizes that.

I am excited to get our kids back to the classroom, when it is safe to do so, but until then I will embrace CDL as being the next best thing during an impossible time for everyone involved.  I’ll continue to give grace to the teachers, staff, and administrators working tirelessly to ensure no child is left behind.  And I’ll continue shouting Hunter’s worth, far and wide, and will soak in every moment I am lucky enough to have watching him learn at home – something I would never have the opportunity to do otherwise as a full-time working parent.