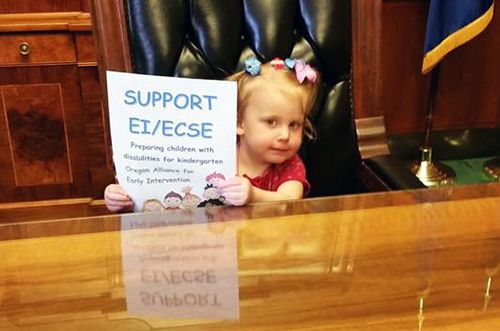 On April 20, a group gathered at the Oregon State Capital in Salem to participate in a rally for Health Care for All Oregon and to take part in advocacy training and a tour of the capital.

We brought along handheld signs, determined to make sure the needs of the disability community were visible in the push for universal healthcare in Oregon. Alongside the signs proclaiming Health Care is a Human Right, we held up our own: Keep essential health benefits, Save Medicaid, Disability Rights are Human Rights, Protect Community and Home-Based Services.

As our country seeks to restructure our current healthcare system, the call for publicly-funded, single-payer health care for all has become an increasingly popular ideal. To this end, over 200 people in support of Healthcare for All Oregon met in Salem to encourage legislators to work toward this goal and to focus attention on the recent RAND Corporation study on how to finance single-payer healthcare.

The proposal advocates a Medicare-based system that would replace Medicaid, group, and private policies. In this system, all Oregonians would be enrolled and care would be provided based on individual needs. My brief review of the RAND study’s findings revealed little mention of how this reform would affect those with disabilities who currently qualify for Medicaid waivers, but the assumption is that it would be left intact. 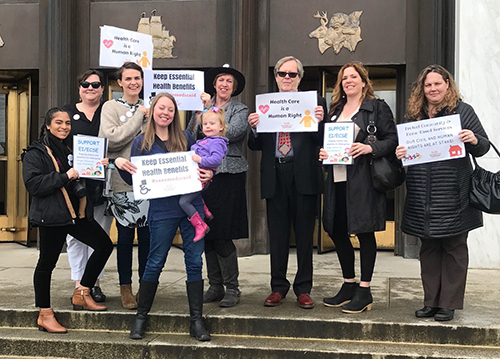 But disconcertingly, recommendations for funding single-payer healthcare are contingent upon maintaining federal funding as it stands now in the Affordable Care Act. The current administration’s push to repeal the ACA, implement the proposed American Health Care Act, and restructure Medicaid has many in the disability community working hard to protect the needs of vulnerable populations.Medicaid waivers are vital to the survival and independence of individuals with disabilities who rely on them for healthcare, supported employment, access to community life, and long-term supports.

The AHCA proposes to repeal the current waiver system and shift to either Medicaid block grants, which would set a fixed amount of federal funding for states, or a per capita cap model, in which federal funding is capped for each enrollee, rather than based on need. Both types of cuts will drastically reduce federal funding, requiring individual states to make up the difference. Advocacy groups such as National Down Syndrome Congress consider both these options devastating for those with developmental and intellectual disabilities and worry that home and community-based services, which are considered “optional,” will be cut to accommodate only the most critical life-saving services. This is expected to result in increased institutionalization and a reduction in job opportunities for those with developmental disabilities.

I often feel so small and insignificant in the face of these frightening possibilities. It seems impossible to see how one person can make a difference. But thankfully, there are many knowledgeable and passionate people and organizations willing to help us learn how to advocate.

Two hours before the rally, Michael Bailey gave our group a brief presentation on disability advocacy. Michael is the father of an adult with Down syndrome, an active member of ADAPT (a national grass-roots community that organizes disability rights activists to engage in non-violent direct action), and has been working tirelessly for years to educate, deliver trainings, and stand up for disability rights. He gave us a brief history of Medicaid, which was originally intended to provide long-term care for people with disabilities and for seniors. He explained the waiver system, discussed the role of Oregon State Legislature, explained how Senate bills are passed, and spoke about the power of our own personal stories in advocacy. Then he gave us a tour of the Capital building. 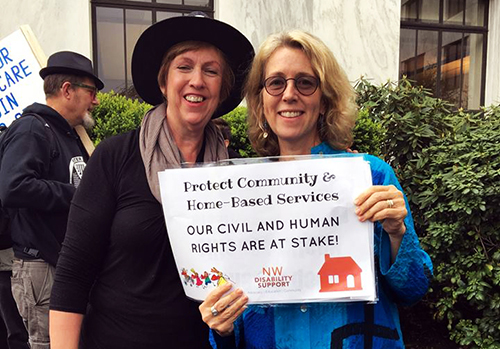 We walked around the building to the ADA accessible ramp winding up to the side door. We walked through the halls and admired the architecture and beautiful art in the rotunda. We sat at Governor Kate Brown’s ceremonial desk. We visited the Senate and House of Representatives and briefly observed the legislature on the chamber floor.

Michael told us, “We belong in this space and this space belongs to us.” And most importantly, he told us that our movement’s power exists not in our pocketbooks, but in our willingness to show up and share our stories.

Our community is very fortunate to have such dedicated advocates who are constantly working for increased equity and to maintain the rights that are currently under threat. Thankfully, many of them are willing to help us find our footing as we, too, learn to take a stand. It often feels like the needs of our communities are too big. Sometimes it’s all we can do to keep up with the immediate needs of our families, let alone muster the energy to do more. But every little effort adds up. Every time we speak, up our collective power grows and our voices become stronger. We can make calls. We can write letters. We can share with our friends, families and communities and help educate others about the issues that affect us. We can show up, even when it’s hard to find time to spare. We can all be powerful advocates. Our civil and human rights are at stake.