One little girl, one big difference 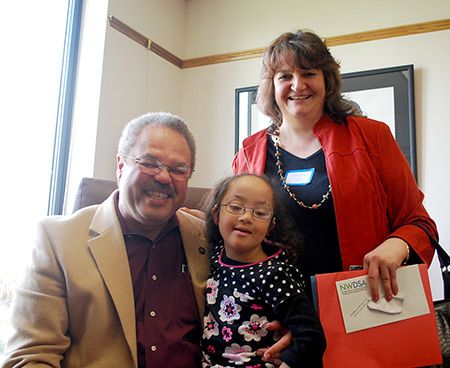 Pamela Dye was anxious as she navigated the halls of the state capitol in Salem on her way to meet with Oregon State Representative Lew Frederick this past March. All the parents at the capitol that day felt the gravity of being face-to-face with lawmakers whose decisions and attitudes directly affect their children’s future. Although Pamela was armed with literature and DVDs, she still wasn't sure what to say to Representative Frederick. After all, how do you tell a stranger all about your family’s hopes and dreams in just a few minutes?

As it turns out, Pamela really didn't have to say anything.

Unlike the grown-ups, Pamela’s daughter, six year old Jasmine, was unencumbered by ceremony and bounded into Mr. Frederick’s office as though he’d just been waiting there all day for her arrival. Like anyone else who meets Jasmine, Mr. Frederick was immediately enchanted by her contagious charm. They chatted for a few minutes and posed for photos. By the time they left, Jasmine had a new friend and ally and had left a much stronger impression on Mr. Frederick than any pamphlet could.

That’s the power of personal, one-on-one contact and the reason why advocacy events like this one are so important.

The NWDSA organized this event to facilitate conversations with Oregon lawmakers, but there was plenty of opportunity for public discourse as well. The All Born (In) banners, featuring beautiful images and quotes of inclusion, stood proudly in the atrium of the capitol building. Passers-by stopped to admire the banners, take literature and learn more about the NWDSA and the All Born (In) movement.

While parents visited the offices of legislators, NWDSA Executive Director Angela Jarvis-Holland spent time with Ben Cannon and Duke Shepard, advisers to the office of Governor Kitzhaber. She took them on a tour of the banners and spoke about the families in the images. She told them about the challenges parents face helping their children get the education they deserve, and how important it is for groups such as the NWDSA to have strong and productive relationships with those in office.

Parents, teachers, advocates, and lawmakers can get so embroiled in the day-to-day struggle of budget constraints and legal interpretations that they lose sight of their goals. It is vitally important to occasionally step back and take a moment to think about the children at the heart of all the fuss and remember that everyone wants to same thing—an excellent education for all children.

The next time Representative Frederick is in a position to stand up for the civil rights of school-age children with disabilities, he will hopefully remember that little girl who lit up his office with her smile, and realize that nothing should stand between her and the education to which she is lawfully entitled.