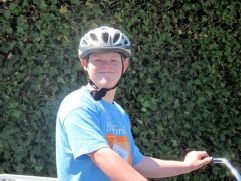 Our son, Cody, has an easy-going personality. He is funny and loves to laugh. Cody is good at swimming, running and making others feel loved. He enjoys hanging out with friends, being around animals, helping others and listening to music. When he graduates from high school, Cody will be a preschool teacher. He also happens to experience Down syndrome.

Since birth, we have strived to have Cody included in all areas of his life. There was no surprise when he showed interest in wanting to learn how to ride a bike. He would watch others and run beside them, trying to keep up. It was painful to see him watch other typically developing children ride their bikes around the neighborhood while he was “stuck” on a trailer bike.

My husband, Shawn, came up with the idea to get Cody an adult tricycle. I believe my response was, “Over my dead body! I’ll teach him!”

Have you ever tried to teach someone how to ride a bike? As you can imagine, the disasters that followed were abundant. He was ten years old and a solid 100 pounds. Fortunately, I came upon an article on Lose the Training Wheels (LTTW). This was it! This was how my son would learn to ride!

After contacting an acquaintance, Patty Verzani, to help, we jumped on the band wagon and started organizing just how we would manage bringing LTTW to Portland, Oregon. Money, volunteers, space, the list was enormous, but we were determined. We decided to book the organization and worry about the details later. This was years ago and we are still going strong!

When year three arrived, Patty and I decided we would officially name our clinic Bike First! We were here to stay and wanted to parallel the concept of People First. Each year, we register 40 people. Some of the participants have returned several years in a row; some skip a year and come back for refresh their skills. Most are new faces from ages 8 to 57!

The most noticeable benefit of Bike First! is people with disabilities learn the skills needed to ride a typical bike. There is an even larger benefit though. Each year, we have an abundance of people apply to be spotters… those who help teach, encourage, and support our participants. The effect on those volunteering, sponsors, those who read about our clinic in the papers, parents, etc. is phenomenal. It affects the way they look at ALL PEOPLE, not just those with disabilities. We see this happen year after year.

For example, kids like Cody: he has a circle of friends who understand inclusion. At least 10 of Cody’s close friends help with Bike First! each year. These children have been exposed in a different way to the value of including all people. They will be in society with a sense of compassion being part of their lives. This value becomes instilled and will stay with them forever. Our society is better because of what happens in Bike First!. In schools we teach academics, but people need to learn COMPASSION. It has taken a back seat.

Our children with disabilities may learn to ride a bike, and it’s a wonderful thing. But we also need to remember the ripple effect Bike First! has. Everyone involved passes it on. The spirit of community is resilient.

For Cody, his bike riding ability has opened doors that invite independence, confidence, and friendships. He is now a freshman at Grant High School and has been a general education student with supports from the learning center since kindergarten. Cody rides his bike alone to school and back each day. Sometimes he takes a detour and gets a Diet Coke or stops at the park on the way home. On sunny days, he rides around town visiting friends. It is common for him to join block parties and call telling us to join him.

Our boy is independent. He is strong. He is friendly. He is included.