Community Voice: Family prevails in struggle to get health care 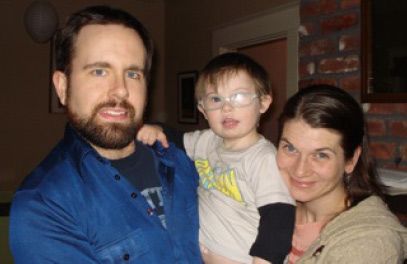 Our family has had a great journey since Archer was born three years ago, but we have had an ongoing struggle with the quest for adequate health care. Uninsured through our work, we’d applied for the Oregon Health Plan when Archer was a baby, but didn’t qualify because of our income level. So for the first two years of Archer’s life, we paid for a policy with a huge deductible that paid for doctor visits, although it didn’t cover any types of therapies until after the deductible was met. Then, in January of 2010, the new Healthy Kids initiative in Oregon raised the income restriction to a level at which we thought we’d qualify if we applied for Archer alone.

We applied, and were rejected once again based on income level … and the fact that Archer currently had insurance. Healthy Kids is restricted to uninsured children, though they do indicate that some exceptions are made due to “serious medical need”.

After consulting with someone at the Healthy Kids office, we reapplied, being sure to mark the “medical need” box, and were once again rejected. About this time, I started to see billboards all over town about how Healthy Kids covered all of Oregon’s children, and I got a bit upset about the whole thing. I again spoke to someone at Healthy Kids and was told that she’d see what she could do to get our case reviewed.

I didn’t hear anything for about six weeks, when we got a letter saying that Archer had been accepted to Healthy Kids. A few days later we got a preliminary packet welcoming us to the program and describing our benefits, as well as laying out our premiums. The details were better than we had hoped, and neither my wife nor myself could really believe it. We assumed that Archer’s Down syndrome was considered as a “serious medical need,” allowing them to waive the regular requirement that new enrollees be uninsured for two months before becoming eligible.

When we got a follow-up call the next week, we thought it was no big deal. But in fact we were then told that Archer was not eligible because our family had insurance; his disability was not a factor in the process at all and the paperwork we had received was a mistake.

This is when I just got mad. I made a number of phone calls in the following days trying to get more information and maybe get the decision reversed, only to run into a brick wall. I then wrote letters to the Governor’s Advocacy Office as well as to my local and state representatives, including my congressman and both federal senators, and some senior people at the Department of Human Services. In a very short period of time, I got a number of responses back.

Less than a week later, not only was Archer re-accepted to Healthy Kids -- based on his medical need -- and the process for reviewing cases like ours was changed. I learned later that this was due in at least some part to a State Representative holding a sit-down meeting to find out how this had happened to us -- and to make sure it didn’t happen to families like ours in the future.

While the coverage offered by Healthy Kids is leagues better than what we had on our own -- and even includes dental! -- it’s disappointing to us that the private insurance companies that contract with the state are allowed to discriminate against people with developmental disabilities. They specifically exclude speech and other therapies for people with “developmental language disorders” or “learning disorders” while offering it as a rehab service if someone of a typically developed nature is injured and needs that kind of help.

That probably means I need to write a new set of letters and make some more phone calls.