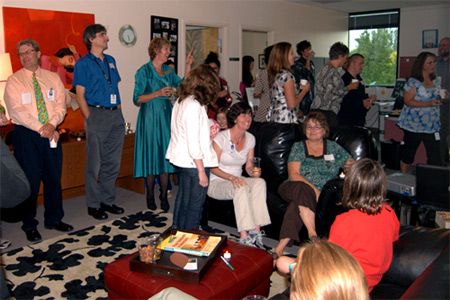 The Northwest Down Syndrome Association rocked the house during its Open House celebration in September at our new headquarters in the Multnomah Education Service District building.

Staff from MESD joined friends and family from the NWDSA community to celebrate the new partnership, enjoying light refreshments, guest speakers and live music from Tony Starlight, owner of Tony Starlight’s Supper Club and Lounge in the Hollywood District. Tony brought along Barbara and Bo Ayars, who helped him regale the audience with several numbers by Neil Diamond. By the end of the evening everyone had their hands in the air and their “heartlights” shining.

MESD superintendent Ron Hitchcock spoke about how the NWDSA found its new home at the MESD building, NWDSA Executive Director Angela Jarvis-Holland spoke about the importance of partnerships, and NWDSA staff member and self-advocate Eleanor Bailey and Youth Board Member Quinn Jarvis-Holland also spoke. We also held a raffle for a Flip video camera that was won by MESD staffer Patty Campbell from School Health Services.

The Resourcefulness Center is open for weekly drop-in sessions and we are always looking for volunteers, so we hope to see you here soon.