Wednesday’s Child is Full of... Love 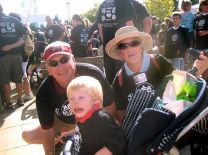 “Wednesday’s child is full of woe.” Or so the saying goes. Yet our Wednesday child is full of joy and rhythm, empathy and smiles; he is full of love. Our son Riley Finn was born on Wednesday, August 31, 2005. Our miracle had finally arrived. Sure, his birth was difficult and he had jaundice and low tone in the hospital. Riley’s pediatrician assured us that he would keep an eye on Riley and his low tone. He encouraged us to go home and enjoy our newborn son. We did. At three weeks, Riley rolled over. Again and again and again. Ha! What low tone? That first year, we lived on Riley-time. He was meeting milestones at his own pace, just a few weeks behind schedule. After all, he wasn’t a textbook baby. He was our miracle, our Riley.

At 14 months, Riley was at a well-baby exam for an upcoming eye surgery to address his crossed eyes. The doctor turned to us and said that Riley’s head had stopped growing at the rate it had once been growing. This, the doctor shared, was an indication of developmental delay. Riley needed a full round of tests at OHSU and we would have to wait four long months for them to fit us in. What? What happened to Riley-time?

Riley charmed everyone at Doernbecher Children’s Hospital. While my husband Cory and I anxiously read the faces of the 11 specialists observing Riley, he scooted around on his bum, smiling. We were heartened to hear that he was on the cusp of grasping new skills and with their help, he would learn them successfully. Minutes later, though, we were horrified to learn that the preliminary diagnosis meant a very early death for Riley. My husband and I gathered up our little boy and left; exhausted and scared but hopeful that the blood tests would bring better news.

Two weeks later, our pediatrician called. With bewilderment and tears in his eyes, he delivered the diagnosis of Down syndrome. We were relieved. Then shocked. Everyone was shocked. The doctor, our parents, friends, family, the specialists at OHSU – no one caught it. No one saw it. No one suspected it.

Initially, we thought our whole world had collapsed. But in time we realized we had been given an amazing gift. We had 17 months of not worrying. We had 17 months of calm before the craziness of weekly therapy visits, IFSP and later IEP appointments. We had 17 months of hopes and dreams for our son that we became determined to not let this diagnosis change. Riley was still our Wednesday child, full of joy and possibility – not of woe.

Now that he’s a big brother to Colin, and has completed two years of preschool, Riley is a confident and capable little guy. He loves to dance, give hugs, sing, recite the alphabet, giggle, count, go on walks, climb, swing, slide and he loves to be helpful. As with all firstborns, Riley teaches Cory and me every day how to be parents, and we’re extra proud of each new accomplishment, even as Colin catches up.

On this journey, we have also had the love and support of both sets of Riley’s grandparents. My parents had retired to a golf course community in Gresham before his birth and became his daycare two days a week, providing a much needed overnight for us and giving the three of them time to form an incredible bond. My Dad in particular was smitten with Riley - he would insist on putting Riley to bed after some Riley/G’pa time and would insist on greeting Riley when he woke up. He didn’t want to miss a thing. He cherished Riley. Riley was his special man
.
The bond they created was so strong it could only be broken by death. Sadly, my Dad died unexpectedly in October, 2009 of silent heart disease. That was the last day G’pa talked with Riley - and the last day that he played golf with his buddies at Persimmon Golf Course.

In honor of my Dad’s memory and his love for Riley, on October 11, 2010, the Persimmon Golf Course is holding the Bill Fallis Memorial Golf Tournament, “Tee UP for DOWN Syndrome.” 100% of proceeds will go to support the NWDSA’s outreach, inclusion and education programs. My mother Melanie would love to give you more information on sponsorship and golfer signups at melaniefallis@gmail.com.