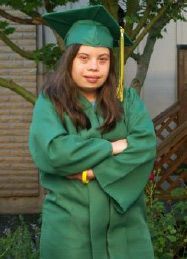 My daughter Chrystal has just graduated from high school. I wrote this reflection of our school journey shortly after our last back-to-school night last September as I ran from class to class, retracing her footsteps through a typical day at school.

Even the hard auditorium seats and the principal’s somewhat overdone joviality were tinged in nostalgia. The halls were awash with parents, a few of them familiar, and we wailed together: “What happened? It was just yesterday they were in kindergarten.”

It’s been a long haul for us. Chrystal was born in Nicaragua with Down syndrome. In 1997 I brought her to the United States “for a few years,” convinced that she would receive a better education here than in our small impoverished city. Uppermost in that conviction was the notion that inclusion, still unknown in Nicaragua, was the way of the so-called “first world.”

Almost everyone involved with the world of disabilities utters either a peal of laughter or a snort at this point in the story. But, amazingly it happened, thanks to John Withers, a visionary principal we had the incredible luck of connecting with. I e-mailed him from Nicaragua stating that I would like my 6-year-old with DS, who understood English but spoke only Spanish, to become part of the Spanish Immersion program, which was then starting up at Atkinson Elementary. And he answered: “Sure, come on,” with a few caveats I didn’t understand at the time, but now comprehend all too well: to register her as a normal student and not to expect any transportation. “They’ll do some testing on down the line,” were his words.

Twelve years later, John, I’m still thanking you in my heart as the bell for fourth period rings and I leap out of my chair in the very functional learning center room, with the very well-meaning and competent, and, yes, necessary teacher. But this teacher’s profession is very focused on repetition and measuring. My daughter’s quarterly reports say things like: “Chrystal read orally a third grade passage with 91.2 correct words per minute.”

With the sounding of the bell, I am released into a general education American History classroom where the teacher exudes enthusiasm and talks of wanting kids to like history and to understand how it has affected people, instead of memorizing dates.

A brief pause for fifth period, which Chrystal spends as an aide in the school’s bookroom, and it’s on to sixth period. Chrystal – who is an incredible schmooze – had talked her counselor into signing her up for this “regular English class.” I had spent most of the summer warning her that she might find senior English extremely difficult.

The room looks more like a neighborhood coffee shop than a classroom – couches, art objects, posters and memorabilia everywhere. The teacher talks of wanting to do something different in senior year, of inspiring creativity and passion along with stimulating reading and writing. I am open-mouthed in wonder and in leaving I tell him that it’s a privilege and a total surprise for my daughter to be in a class where creativity is fostered. He laughs. He has no idea, I think, what I mean when I say “privilege.”

The final period is Art 3-4, and we are surrounded by a wealth of visual stimuli; color and form and an elaborate grading scheme designed to reward good intentions in this class of 40 students.

I walk home through the brisk autumn dark, asking myself why I feel so much happier in the general education setting, with its emphasis on inspiration, than in the learning center with its relentless emphasis on measurement and “adult living skills.” Is it me?

It’s been a long day, it’s been a long journey, and I’m a little tired. There have been pages of e-mails, hours and hours of homework, countless IEP EP meetings that always felt like trial by a jury not of our peers. But 12 years on, I have a daughter who moves through school with confidence, eagerly greeting and being greeted; who moves easily between English and Spanish; who understands that sometimes she needs help with things that others find easy; and who is full of illusions, dreams, projects and ideas…and creativity, just like every other 18-year-old. And, yes, I believe that her “typically developing” classmates (whatever that means) have also learned something over the years, as I can note by their total ease interacting with her.

We had a miracle happen on entering kindergarten. It fills me with rage that inclusion is ever less the norm in our district, that it is not “the way of the first world” as I innocently thought 12 years ago, that parents and students still have to fight so hard to be included in the halls of our public schools. But I am convinced that it’s a battle worth fighting.