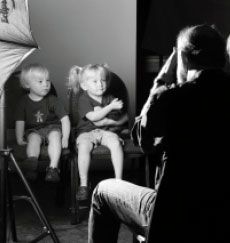 On a recent Monday morning in downtown Portland, the hip performance space Someday Lounge was turned into a photography studio. Families came through the door one after another to be photographed for the NWDSA’s upcoming expansion of the All Born (In) photo awareness exhibit, and the next calendar.

Photographer John Campbell and his assistant Mia Allen set up a studio and welcomed models ranging in age from 14 months to 23 years. Kids snacked on juice and crackers as they waited for their turn in front of the lens. The final model requested music, so the day ended with the club’s sound system booming.

By now, most of you have seen the All Born (In) calendar from 2009, and many remember the first DSNow calendar from 2007. Both calendars feature beautiful photographs that represent people with disabilities in a strong, respectful light. Many of the images from the 2009 calendars are also displayed on 6-foot tall banners that make up our ABI photo awareness exhibit. The exhibit has been on display in various locations around Oregon and Washington, and even traveled to Washington, DC.

The theme of the exhibit expansion, and the next calendar, will be the issue of prenatal genetic testing. The NWDSA has been concerned with this issue for the past several years, as the quality of information given to parents lags behind the demand for prenatal testing. With this next batch of photos we hope to expand on the idea that people with disabilities are powerful individuals, deserving of a place in our society.

We are fortunate to be working with Giuseppe Lipari of Studio Lipari on the design of the calendar. Giuseppe, who serves on the NWDSA Advisory Board, designed the gorgeous 2009 calendar. In addition to running a graphic design studio, he is a co-owner of Someday Lounge, and was able to arrange for us to use the space at 125 NW 5th Avenue for the recent photo shoot. He was also kind enough to introduce us to John Campbell, a portrait photographer and cinematographer specializing in documentary work. We feel incredibly lucky to be working with such a talented crew to build on the success of our prior work.

Past contributors to our photo awareness work include Jodi Collins of Urban Photography, Alex Harris, Bryan Dalton, Joshua Dommermuth of Quixotic Images, Newspace Photography Studio, and all the families and individuals who have been willing to sit for portraits. Each time we expand our project, we grow our web of individuals personally connected to the All Born (In) movement to create a more inclusive civil society, and we are incredibly indebted to the time and talent of all of the individuals who have contributed.