From NW to DC: Advocacy on the national level 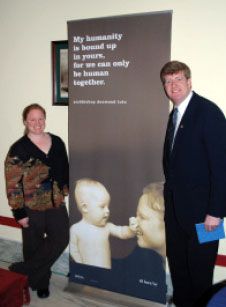 In February, the NWDSA Board of Directors had the opportunity to travel to Washington, DC for a conference that brought together parents and advocates from Down syndrome groups across the country. The conference involved a day and a half of sharing ideas and learning together with other groups, and a day of advocacy on Capitol Hill.

The whole trip was interesting; the highlight of our trip was the day that we spent on Capitol Hill. The day kicked off with a reception hosted by Congresswoman Cathy McMorris Rodgers of Spokane, WA and Congressman Patrick Kennedy of Rhode Island, two of the co-founders of the Congressional Down Syndrome Caucus. We shipped the All Born “In” banners across the country to bring a message of inclusion to the gathering. We also shared All Born “In” calendars with other groups interested in sharing the calendar’s powerful message with their Congress people. Members of the Congressional Down Syndrome Caucus graciously welcomed us to DC, and then along with 300 other Down syndrome advocates, we fanned out in the halls of the Senate and the House to meet with our legislators and let them know about some of the issues of concern to our community.

NWDSA board members had the pleasure of meeting with Cathy McMorris Rogers and Jeff Merkeley of Oregon, and we also met with legislative aides from the offi ces of Congressman Brian Baird, and Senators Patty Murray and Maria Cantwell of Washington State. It was a wonderful experience to sit with these people, introduce our families, and share a bit of our stories. Our adrenaline ran high, and we walked until there were blisters on our feet, but by the end of that long, invigorating day, it was clear that we experienced just a small taste of the work that goes on in DC on behalf of our community every day.

In the midst of our day on the Hill, we had the good fortune to stop and have lunch with Sharon Lewis. Many of you may remember Sharon from her days as an advocate on the state level here in Oregon. In 2007, Sharon was invited to Washington, DC on a Kennedy Fellowship, and is the Senior Disability Policy Advisor for the House Committee on Education and Labor. She has become a very well regarded advocate, and we were glad for the chance to sit with her and get some pointers on the workings of our Federal Government. It was also nice to take a few minutes to catch up with an old friend.

We also enjoyed crossing paths with Madeleine Will, director of the Policy Center at the National Down Syndrome Society. Madeleine has been working as a disability advocate for 36 years, and she recently took a few minutes to talk with me about her journey and her experiences as a mother and as an advocate. Like many of us, Madeleine began working on disability advocacy after the birth of her oldest son, John, who was born with Down syndrome. She started as a volunteer, but as someone with an interest in the world of public policy, she soon realized that she had found a career that suited her well.

Madeleine’s career spans almost 40 years, and a generation’s worth of changes. She was present and involved on several pieces of ground-breaking legislation that improved the lives of individuals with disabilities. She worked on the state level in Maryland to pass one of the first laws in the country legislating community-based services for adults with disabilities, and at the federal level, she has worked on IDEA, ADA and, most recently, the Kennedy-Brownback law, which requires doctors to give current information when presenting parents with a prenatal diagnosis of Down syndrome.

I could fill pages with stories from my conversation with Madeleine, but I will leave you with a few final thoughts. Madeleine said the goal in her work is to see our society reach a better understanding of the positive, affirmative contributions that individuals with disabilities make to our families and communities. This vision keeps her working tirelessly to find partners who share her focus and drive.

When asked what advice she would give to someone like me, who is just starting out in the advocacy world, she said, “If you want a different vision for the future of your child, you must will the necessary means to achieve that vision. One way to get there is through the advocacy and public policy channels... Even if you don’t like it and aren't comfortable, advocacy is something you can learn to do. Nothing is more powerful than responding to an action alert or talking to an elected official.”

I am grateful that the NWDSA has given me the opportunity to start to explore the world of advocacy, and I am also incredibly moved when I think of the work done by parents and self-advocates who have come before me on this path. Mostly though, I am grateful to my daughter for giving me the drive and conviction to fight for the change that I know is possible in this world.