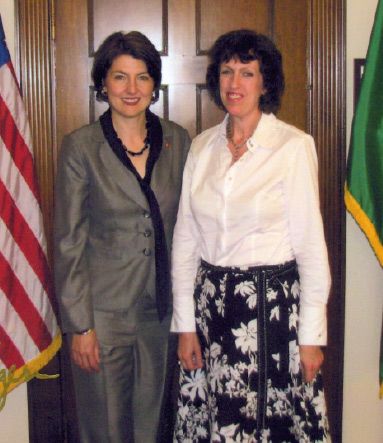 On August 18th, five NWDSA representatives joined U.S. Representative Cathy McMorris Rodgers of Eastern Washington for a conversation on prenatal testing. The NWDSA led a diverse group in a dynamic discussion of the medical, ethical and financial implications of prenatal testing for Down syndrome and other genetic conditions.

Congresswoman McMorris Rodgers and her husband Brian are the parents of 17-month-old Cole, who has Down syndrome. In May of 2008, Rep. McMorris Rodgers joined with three other members of Congress to form the bi-partisan Congressional Down Syndrome Caucus to bring attention to issues affecting individuals with Down syndrome and their families.

The NWDSA’s relationship with the Congresswoman began when Jamie Burch sent her a New Parent Guide just after her son was born. When the All Born (In) photo gallery was in Olympia in March, I met Jamie Herrera, my representative in the Washington State House of Representatives, who is a former aide for Rep. McMorris Rodgers. Rep. Herrera offered to help connect us with the office of the Congresswoman. After phone and e-mail correspondence with staff in Washington, D.C., Angela Jarvis-Holland met with Rep. McMorris Rodgers to discuss a variety of issues, including genetic testing. The Congresswoman expressed interest in learning more, and so the August listening session was arranged.

The meeting was a chance for Rep. McMorris Rodgers and her staff to hear directly from parents and professionals about genetic testing and its implications for our community. Cori Feist, a genetic counselor at OHSU, spoke about the history of genetic testing, the current use, and where testing may go in the future. Father Robert Spitzer, President of Gonzaga University in Spokane, discussed how ethical concerns around genetic testing might affect both public policy matters and decisions made by individual families. Two years ago the NWDSA commissioned a study from PSU graduate student Abi Coatney about the attitudes around prenatal diagnosis in the medical arena. Everyone who attended the listening session went home with a copy of this thought-provoking study.

As with all of the work of the NWDSA, the parents and self-advocates sat firmly “in the driver’s seat” for this meeting. This value is at the core of all that the NWDSA does; we believe the most effective advocacy is achieved through partnerships between empowered parents and enlightened professionals working within a best practices framework.

In preparation for the meeting, we asked community members to share the story of their child’s diagnosis. We presented each participant with a packet of these stories, so they could go home and read first-hand accounts from the true experts, the parents who have lived through the experiences we discussed. As usual, community advocate Eleanor Bailey stole the show with her Power Point presentation about living with Down syndrome.

Whether we are parents sharing our stories with friends or in the media, self advocates promoting awareness at school or in the community, or a Congresswoman on the national stage, we are all in a position to work for positive change, and should not underestimate the power of our own stories. In the face of alarming statistics around pre-natal testing and abortion rates, it is important that each of us takes a minute to think about what we can do to promote Down syndrome awareness. Everyday advocacy is where change begins.